by Chris Randall
9 comments
I hit all the obvious highlights yesterday, so this morning I spent some quality time in Hall E, the Basement Of Failed Dreams And Sadness. This is the fun hall, because it has all the booths where an inventor is risking everything on a throw, plus all the hyper-aggressive English-challenged Chinese clone-mills. (Remember last year's classic signage: "Nearly Zero Defects!") There's a lot of heart in Hall E. I tweeted a lot of the fun stuff I came across, and for most of it there's not much more to tell than that. I mean, Chord Dice? Those are so patently obvious, it doesn't bear explaining. Lots of that sort of thing. 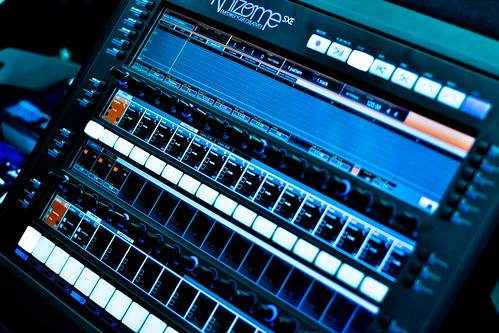 One thing I did spend a little time with was the Rhizome SXE. Aside from Empowering Your Creativity?, it is actually a pretty cool live performance tool, especially if you're in to the whole streamlined workflow thing. Unlike a lot of Linux-based all-in-one tools, it is _very_ quick. I tweeted a video of me switching modes and such on it. While I tend to give this sort of thing the Hairy Eyeball, the Rhizome actually intrigues me a bit, surprisingly. The creator wasn't in his booth when I stopped by, so I'm going to hit it again tomorrow (twss) in the hopes of getting a full demo. 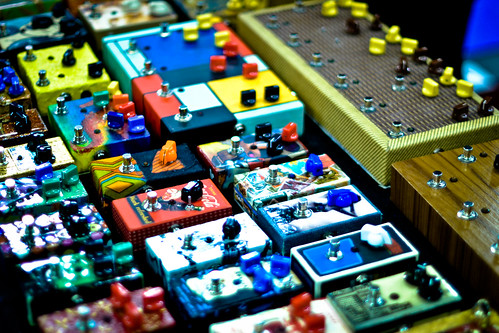 It seems like there are about 20,000 boutique pedal makers at NAMM. The vast majority of them are slinging the usual clones (Octavia, FuzzFace, Tubescreamer, Orange Squeezer, etc.) and Jam Pedals is no exception. However, what sets them apart is that each and every pedal is hand-painted; not like ZVex, where there's a general style for a particular kind of pedal, but rather each individual one is its own work of art. Jam is a Greek company, if that matters. One thing they do is combine their pedals in to single multi-pedals, where you pick the signal flow and features (within reasonable limits) and they make you your pedal. Each one is decorated uniquely, and you effectively have an all-in-one pedalboard built to your specs, that is also a small work of art unto itself. I like their style. Pure Hall E.

I went through all the guitar displays in the main hall today, and came across a couple nice guitars (the Fano stuff really caught my eye) but NAMM really isn't the environment for noodling with something, and honestly, one quirky tube amp sounds pretty much like another after a while. And the guitar area is right next to the drum area, and you know how I feel about drums, so it was just pretty stressful all around.

Saturday is my reward for a job well-done. This reward consists of hanging out in the Fender area, where I have several friends, and spending some seriously quality time in the piano room, fondling $200,000 instruments and pretending I can, like, play and stuff. I'll also attempt to get to any questions that you have that I didn't manage to answer today via the twatscape. And the Trash Audio BBQ is tomorrow night, of course.
READ MORE:
9

Chord Dice soon to be a major motion picture. Text from their website:

"I just want to play a new song," she said with a disappointed frown on her face that spoke volumes. "I don't know which chords to play or which ones sound good together."....Her comment echoed like a primal yalp through the Grand Canyon for weeks, but it fianlly [sic] helped us cross the great divide between dream and reality. What a moment!

Did you get to spend any time checking out the Auto-Tune for Guitar? Looks like Peavey and Parker are starting partners.

I could give a fuck about the actual getting a guitar in tune feature (I can tune a fucking guitar, that's never been a problem that I need solved) but I am intrigued by the alternate tuning/virtual capo features and, to a lesser extent, the pickup modeling.

It looks like a natural progression from what the Variax guitars guitars can do but with the ability to change tunings on the fly instead of storing them and recalling them as presets. But their website glosses over just how you interact with the controls, other than saying it's MIDI.
Jan.21.2012 @ 7:16 AM

I'm curious about that too. I went to the Parker booth, but they didn't have it anywhere I saw it. I may try again today.

@obscurerobot: honestly, nothing, really. I mean, it's NAMM. There's a lot of Chinese knock-off companies, who are in the business of cutting corners and telling everything from mild fibs to outright lies. If I took the time to go whole-hog on those guys, that's all I'd have time to do. There are hundreds of 'em. But "horrible?" Nah. Just business.

There are a lot of poorly thought-out products from big companies, a lot of cheaply made junk masquerading as "pro" gear, a whole lot of L.A. industry types who think traveling 10 miles from the Sunset strip is roughly akin to making first contact with a canibal pygmy tribe in Papua New Guinea on the "big adventure" scale. All these things are silly. But horrible? Hardly. It's just the music industry.

Honestly, I just wander around in my own little world, stopping to play with things that catch my eye, talking to the engineers that made the things. The younger salesmen who open with the "ZOMG HOW MUCH DO YOU THINK THIS COSTS???!!!" tack get the instant brush-off; I'll actually be fairly rude to them. They need to learn their place. And the presumptuous fake tan motherfuckers who are on their cell phones "making moves" in their knock-off Hugo Boss, I'm not very polite to them either. I don't like them in any context, but NAMM is my world, and here they're tourists, only in it because it's a job, as opposed to the people who are here because it is their life.

Another NAMM, another heartbreak for those of us waiting for an announcement on the Kurzweil K3000.