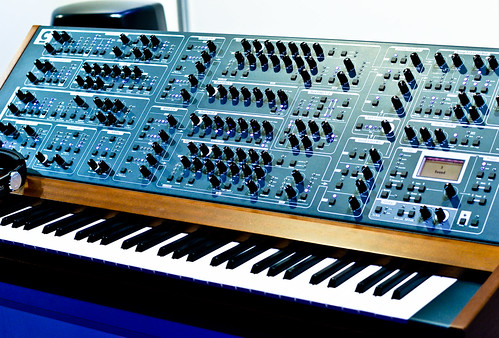 Just got back to the RPV after the first day of NAMM. The best thing I saw today was the Schmidt Polysynth. While it is somewhat comical when you're sitting on your couch reading about it (and I laughed when I saw the Messe announcement, just like the rest of you) in real life it is as close to a work of art as a synthesizer can be in this day and age. Completely over the top? Sure. But you get a lot for your synthesizer dollar. Good thing, because it's a lot of dollars. Absolutely beautiful synth, though. 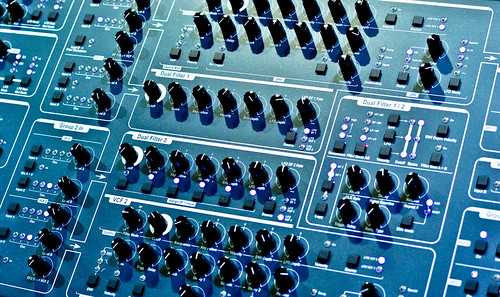 Its panel is a little overwhelming, honestly. But at the end of the day, it is a sophisticated synth with a lot of programability. Sonically, it wipes the floor with any other modern analog I've played. (No offense to my many friends who make modern analogs, but this thing swings for the fences, no expense spared, no corners cut.) 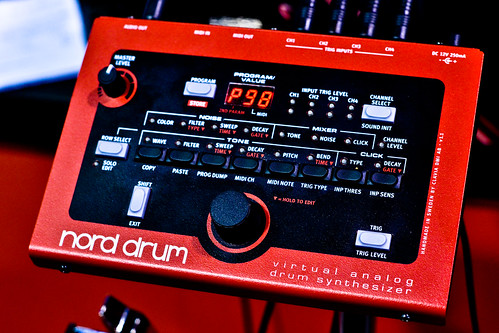 A lot of people here and on Twitter asked about the nord drum, so I asked for, and received, a full demo. They cut a lot of corners to keep the costs low on it, and it has some interesting design choices as a result. A single monophonic output is probably the most glaring oddity. No headphone out will probably disturb some people too. The way the nord rep explained it to me, this is for that rock band that has one pad to trigger the big 808 foot. (Think Korn.) In that context it is fine.

Sonically, it sounds very nord-ish. I've always thought that nord products had a particular boxy sound to them, sort of like every solo Greg Hawkes ever played all jammed in to one red box. The drum is right in line with that. If I had to pick one word to describe the sound of this box, it'd be "electro." The trigger inputs work incredibly well, but that's no surprise considering Clavia's situation with ddrum. Lots of good IP for drum triggering up in there. The salesman told me $250 street, but I got the impression that's not a final number.

I fiddled with the Minitaur briefly. It is exactly what it says on the tin: a cheap-ish way to get a big ol' Moog bass sound. Very limited, sonically. It essentially makes about 6 sounds total, all of which you've heard a bajillion times before. If you need that particular bass sound, here's yet another way to get it.

The Arturia Minibrute is about the size of an SH-101, maybe a touch smaller. It really reminds me of the Novation BassStation, sonically and features-wise. The keybed feels like ass on a platter, and it is about 8 keys short of playable, in my opinion. But there was a Roland rep at the Arturia booth laying down some serious stank on the thing, so it's certainly possible. Another one-trick pony. If that's the trick you need, you'll find it here.

I got a full demo of the Solaris from John Bowen and (shit, I'm sorry, dude, I forgot your name...). The Solaris is the logical progression of the Prophet VS and Wavestation. It takes those concepts and just extrapolates them out in to what a DSP-based synth can pull off in 2012. The panel is really well laid-out, and super playable. Some very crafty features internally as well, and the many mod routing possibilities, coupled with an extensive oscillator and filter library (and user samples, natch) gives it a really broad palette. I think this is going to be my next synth purchase.

That Alesis keytar everyone is crowing about is a complete piece of shit. It feels like a RockBand controller. About as cheaply constructed as they could get away with. Setting aside the fact that it's a keytar and thus pre-retarded (pretarded?), it's a shitty controller. Period.

iPad docks. iPad apps. iPad accessories. iPad. iPad. iPad. To quote Art Gillespie, Alesis/Numark/Akai went all Honey Badger on the iPad. So did everyone else. There's so much iPad-related gear at NAMM this year I don't even know where to start. So I won't.

Anyhow, that's my general take-away from today. My mobility is somewhat limited so I couldn't cover the ground I could last year. Tomorrow morning I plan to spend my time looking at guitar-related things, so if you have any guitar, bass, pedal, or amp requests, now's the time. And I'll field any and all questions about what I saw today until I fall asleep.
READ MORE:
39

@beauty pill - not sure it's got a firm price yet. only speculation... but there were rumors when they showed it at messe that it was in the 5 figures range... 25k euros

First year I haven't gone in eons due to moving away from LA. Outside of iPad shiz (which I'm proudly head-in-mud about because I don't like making music with a flat piece of glass), a lot of really almost cool stuff, eh?

MiniBrute is an octave and an oscillator short of being cool.

Minitaur- where's the PWM? And don't say "it's only a bass synth"... low square and octave up LFO'd PWM equals face melting bass tones. Just one switch and one knob would do.

Akai Max controller- I have to admit, eight touchee strips with LED's and sequencer is nifty, but really now, lose the transport controls and MPC pads. Why is every controller obligatorily an MPC and a tape deck? I promise, your drum samples don't sound any fucking better whether triggered by a square button or a piano key. You have my word on this. Oh yeah, and the numeric keypad doesn't make my sequences start and stop any better than a dedicated button with an arrow (besides, I have Mackie controls for this kind of thing. You'll note they don't have piano keyboards or MPC pads on them.)

I'm thankful my car wasn't designed by Akai, M-Audio or Novation, otherwise I'd have a BMW sports car with 14 cup holders, a flip-down picnic table, a tow hitch and a rack on top for my kayak.

P.S. Thanks for blowing it Alesis and NOT making your keytar wireless. I'm sure the "neck flip accelerometer" is a much more desirable feature. I can still claim rights to having the only wireless keytar (heavily modded MidAir 37 if you're curious).
Jan.20.2012 @ 5:06 AM

Seems someone took the Bahn Sage concept serious and actually built something close.
Jan.20.2012 @ 5:22 AM

Does the Pulse 2 actually exist in a physical form yet? All I've seen are the renderings and on-paper specs.

Personally, I'm disappointed that Alesis/Numark/Akai could collectively only come up with 3.5 new docks. Maybe they're leaving some room for Roland to release their accordion dock/controller.
Jan.20.2012 @ 9:26 AM

@Duke: Ken didn't have the MicroMac hooked up. It was there, but he was missing a cable. It should be hooked up today. So I can't compare. I did spend quite a bit of time with the Vortex, which is _outstanding_.

I didn't look at any other modular stuff, other than a quick visit to the Analog Haven booth to say "hi." I'll be doing that this morning. Full modular report tonight, along with guitar stuff.

@Chad: There wasn't anyone in the Schmidt booth to ask about the price. If I had to guess, I'd say mid-$5K. I'll try to find out today.

It is a box full of Moogy brown notes, like I said. Limited feature-set, which means Limited sound palette. It certainly does what they say it does, but that Mark Doty video is 100% of what it can do. There's nothing special hiding in there that I could find, and I'm good at finding that sort of thing.

@Joshua: I didn't see the Waldorf booth in its usual spot. I'll try to hunt it down today; it would shock me if that conglomeration of companies weren't at NAMM.

The Schmidt is a thing of beauty
Page 2 of 4