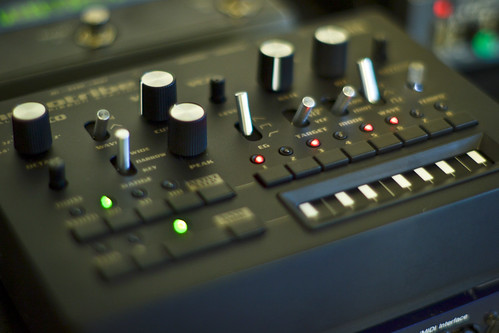 Last night my BFF The UPS Guy dropped off a shiny new Monotribe. I really haven't had time to put it through its paces, so I'll pre mea culpa this review in to submission by saying that once I've attempted to use it in a song, I'll almost certainly have different views. If you're reading this via a Google search and it's more than about a month old, chances are good there's another review later in the timeline.

With that out of the way, some thoughts:

1. It is much larger than I thought it would be. It is bigger than a TETR4 / Mopho. About the same footprint, but it is quite a bit taller. It is also heavier. It ships with 6 AA batteries, but it doesn't come with a wall wart. Korg, being Korg, didn't give it a standard 9V power hole, so you can't power it with one of the 30-odd 9V bricks you already have. Thanks for that, Korg. Good lookin' out.

2. Construction-quality-wise, it is far sturdier than the Monotron. It is fairly chunky. The pots have some wiggle to them, but I imagine this is made with the cheapest possible components, and if the Monotron is any indicator, we're lucky to get knobs at all. In fact, four of the controls are the same as the little pot shaft things on the Monotron, while five of them (the more often-used ones) are of a more substantial construction.

3. The sequencer is very crafty in its operation. However, the 8 step thing is really truly annoying. And note that the unit runs at 1/8th note steps. It's kind of normal to think of 8 steps as half of a measure, but as far as this is concerned, it runs at 1/8th notes for a whole measure.

4. There is an iOS app (here) which allows you to send sync to the Monotribe, using a number of different methods. You could, for instance, be running iElectribe on your iPad via MIDI sync, and sync to the Monotribe app via a WIST session. You'd be best served by having several iDevices to pull off this tomfoolery. Also, when driven by the app, the Monotribe switches to a 1/16th note timebase of a half measure, sort of. (The opposite of point #3, above, but you can really only program 8th notes, still. So you get four.) You can also hit the sync control with a 5V voltage spike (or dip, selectable) so if you have a modular or a DC-coupled audio interface, you can sync the Monotribe's sequencer that way.

EDIT: The drum machine is 16 steps, and can save one pattern. I have verified this. See comments. The synth is 8 steps only, though.

5. The synth voice sounds like an MS10 to me. Taken in concert with the LFO, it is a fairly capable voice, much broader in ability than the Monotron. The filter is even a little bit screamier. The drum voices sound like they came from an SR-120. Not "phatt" by any means.

6. I couldn't find any mods with a cursory Google search. I'm sure they'll be along shortly, though.

Anyhow, that's the general idea. I'll use it in my next Experiment video, so you can hear it in context. There are a couple dozen demo videos on YouTube already, so you can get a good idea of its operation. I bought it here for $229. If you have any specific questions I'll be happy to answer them to the best of my abilities.
READ MORE:
18

There's a thread about mods on muffwiggler: link [www.muffwiggler.co...] there's some some pics of the circuitboard on there, which clearly shows where to mod for decay and individual outs for the drums.
Jul.22.2011 @ 1:19 PM

if not there are clearly marked points on the board for HH out, sd noise out, sd frame out, bd out.
also points that indicate hh decay, sd noise decay, sd decay, bd decay.
i had it open then fucked it. its back alive now, but apart from those points, its quite tight in there
Jul.22.2011 @ 2:06 PM

The step sequencer on the Monotribe is actually 16 steps. You hold down the part buttons during programming to access the in-between steps. I don't own a Monotribe, but I found that out playing with this app:

I had to look it up in the manual just to be sure the actual Monotribe works that way too, and it does. Korg really doesn't make it very clear though. I'm not sure why they would bury such an important function in a little not-so-obvious blurb in the manual. To compound the confusion, they then continually refer to the sequencer as an "eight-step sequencer" throughout the literature. Way to go Korg marketing team! At least it seems that the design engineers didn't have their heads so far up their asses.
Jul.22.2011 @ 6:16 PM

Okay, for the record, the drum sequencer is indeed 16 steps for all three voices. The synth's sequencer is only 8 steps, and when it is driven by the iSync thingamajig, it seems to devolve to four steps.

Also, you can save one (!) drum pattern as the default.

It's not as noisy as the monotron, no. Haven't tried the filter input, so I couldn't speak to that. PCB pics are linked twice already in this thread.