I'd been thinking of going to a standing office solution for some time now. I kind of got half-way there when we moved to our new house in February. Most of my music gear was in a standing work configuration, but my main desk was kind of in an in-between stage, where I could sit at it with a tall office chair (the kind you'd find in a lab or something) and I could stand at it. But standing at it wasn't terribly comfortable, because I had to look down at the monitors, so my neck ended up hurting at the end of the day. As a result, I mostly sat at it. Plus, it wasn't quite tall enough, so my wrists were bent when typing, which added to the general discomfort.

After hearing a couple pieces on NPR on the subject of being much healthier if you stand/move around for at least part of the day, plus seeing the radio desk solutions at NAB (some of which were motorized, like this) I decided to go whole hog. So I broke out the measuring tape, and figured out that the exact right height for a desk for me was 40" (I'm 6' 4" tall). This would result in a comfortable typing position while standing.

A trip to the excellent Industrial Metal Supply here in Phoenix was in order, wherein I bought nigh on 30' of 1.5" square steel tubing, then over to my friend Mike Fisher's house, where a MIG welder can be found. A couple hours later, and I have the perfect sized standing desk, no motors necessary.

The next thing, and this was, as it turns out, the most important part, was to get my monitors to eye level, so I didn't have to look down at them. After some browsing about, I settled on this contraption. It works perfectly, and gets my pair of 23" LCDs right up to where I don't have to bend my head down to look at them, thus alleviating the neck pain part of the operation.

A tabletop from Ikea later, and my standing desk is in full form. I got all this done on Sunday, and have now spent a week doing my normal work at it. My feet hurt from standing the first couple days, and the small of my back hurt from standing up straight for 8 hours. I was warned about this, and all is to be expected. After a few days, it is more comfortable to work at, and I've adjusted the height of the monitors a couple times to get them in just the right spot.

I can't strongly recommend this course of action at this point, because I don't know what the long-term effects are going to be. Whether I'll be healthier or not is kind of a subjective thing. I would vastly prefer to sit in a comfy chair all day, leaning back and pondering life's complexities. But after 10 years of basically sitting at a desk all day every day, I'm starting to notice the effects, and it's time for a change, even if it is painful at first. I'll post again on this subject at this time next year, and we'll see how things went.

Has anyone else gone to a complete standing workspace? Have you been doing it for a while? Notice any major differences, good or bad?
April 22, 2011

by Chris Randall
56 comments
We're busy building our latest Roadmap To Success/Five Year Plan/Whatever, and while I have a fairly good idea of what the answers to this poll will be, I'd like a little less anecdotal evidence. While it's true that most of us use multiple platforms, I'll wager one of those options is the one you can't live without. Click that one.

(Note: if your main DAW is Live OSX, hit the "OSX 32-bit VST" option. Obviously, you can use AUs in Live, but it is more or less pointless to do so unless you need to share presets with Logic.)
April 20, 2011 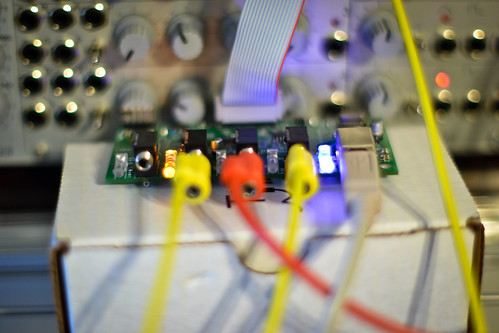 Making nice, albeit somewhat slow, progress on the 2io module, the first Audio Damage hardware release. I now have the prototype in my possession, and am busily trying to break it. It works entirely as expected once we solved a rather silly mistake in chip choice. The original USB audio codec chip we chose reports its power current consumption as 500ma, despite only actually using around 30ma. The iPad won't recognize a chip that reports more than 100ma. So while it worked fine as a USB interface, it didn't work at all for its main purpose.

In any case, initial tests with this current rev with Silent Way and CV Generator show that it works like a charm in those contexts. As a Euro-format iPad audio interface, it is working flawlessly. So, in short, all is well.

We're doing one more rev of the prototype just to double-triple-super-duper check our work, then it's off to production. While all that is going on, we're just getting in to the prototype stage for adm01, so expect some reporting from that front as well, as soon as I have something to show you.
April 17, 2011

Ever since I switched from Pd to Max and didn't have to deal with incessant Problems, I've spent a lot more time working on my own music in this environment, rather than just using it for product development and such.

Lately, I've taken to making songs that run with little input from me, and contain no samples whatsoever. These tracks are built entirely from Max rudiments, and my only concession to convenience is in using reverb and compression plug-ins. (The main reason is that I'm not really able to make a compressor or reverb sub-patcher that is anywhere near the quality of Eos, ValhallaRoom, or DMG's upcoming Compassion compressor.)

These tracks use no external hardware of any sort (which sets them apart from, say, Procedure 1 off the most recent Micronaut EP, which uses external effects units) and, as I mentioned, no samples or pre-recorded material of any kind. They are, other than the 3 VSTs I'm using, entirely Max synthesis.

Now, the reason I'm bringing this up isn't really about the musical result, which is subjective, of course. As you all full well know, one of my foibles is placing strict limits on my creative process, and this is about the furthest I've taken that particular course of action. It is fundamentally the same as drawing a single Oblique Strategies card at the start of a session, one that says "Make Things Hard On Yourself." I mean, on the track from the screenshot above (which isn't even close to done) I spent about 5 hours coming up with the first sound, the kick drum. Working in a DAW, I'd have spent maybe 5 minutes in the Kick Drum Samples folder (called, in my case, Foot Samples, of course, since I'm funny like that) to find something that worked, then carving it for a bit with some EQ and compression and calling it done, and moving on to the next thing.

Anyhow, the net result of this process, aside from the music itself, is that I have a fundamental understanding, at the physical level, of each and every sound in the track. This makes the creative process quite odd, I find, being so close to the sound generation. Obviously, none of us are strangers to these general techniques, but we usually deal with them at a much more abstracted level (e.g. the front panel of a synthesizer). Whether I could heartily recommend this course of action is open to question as well, but it is an interesting thing, being so close to the sound generation. I think the closest analog would be building a track sound by sound using a modular synth, but even then, once the track has been laid down, you've unpatched it and moved on. Here, the entire song is a living, breathing sculpture with all of its parameters bare for tweaking.

But it ain't what I'd call a Streamlined Digital Workflow, I'll say that much.

Anyhow, has any other AI reader done something similar, so willfully obtuse? Obviously, making wrawk music or jazz with traditional instrumentation is a nearly identical process, but embracing physics instead of pure math. Or at least I think it is. I'm willing to be dissuaded from that viewpoint.
April 14, 2011

by Chris Randall
7 comments
Obviously, I bailed on NAB early, because I got both sick and tired. Working at home doesn't prepare you physically for the necessary miles and miles of walking that have to occur at a show of that size. I'm in good shape for my age (or even someone 15 years younger, all other factors being equal) but I don't spend a lot of time walking. Anywhere. So my dogs were barking after the first day.

On top of that, not interfacing with the GenPop on a daily basis, I'm a virgin field as far as comunicable diseases go. I got waylaid that evening by some bizarre bug, most likely from either a third world country or Texas. Luckily it passed through me by the time I actually got home.

Anyhow, since I got home I've been working on assembling the various tertiary shit that will go out with adm02 units. Namely, I've been making cables. Lots of cables. Lots and lots of cables. Using the usual metric for how I value my time, we'll be ordering pre-made cables in the future. I'm a big fan of vertical integration, but I draw the line, you know? I've also been moving machine screws from a box in to individual baggies.

Anyhow, I'm putting that aside today to work on the UI for the actual next AD product. I don't want to throw it up until it's done, but suffice to say it will make some people mad and others happy, as is the case with refreshes. Back to the salt mines.
Displaying 1 to 5 of 12 available blog entries.
Page 1 of 3